After hearing all sorts of explanations about their origin, today I would like to talk about columnar basalts.
Here in Sicily we have several outcrops of this kind of rocks, like the ones at Alcantara river, at Lachea island or along the Timpa of Acireale, in Aeolian Islands and Pantelleria. 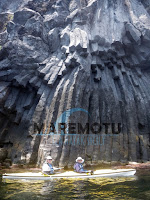 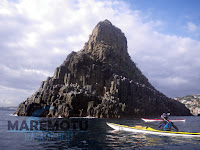 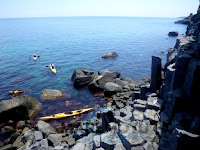 These morphologies are typical in lavas of basaltic composition (therefore with percentages of SiO2 between 45 and 53%) that during cooling have fractured in a very particular way due to thermal contraction.

This type of fracturing, which isolates long polygonal (often hexagonal) columns (hence the name "columnar basalts") can be observed when large masses of lava are cooling down.
The portion that cools first is obviously the outermost part, such as the surface or the base or even the sides of this mass of lava and it is here that these contraction fractures are formed, leading to the growth of a polygonal mosaic on the surface. These polygonal cracks, interconnected to each other, propagate towards the central portions of the lava mass together with the cooling, thus isolating blocks that we will see as polygonal columns when the lava formation will be eroded and exposed.
The phenomenon, at least in its former stage, has been observed from the 1960s in Hawaii's crater lava lakes (lava pools at 1200 ° C almost one kilometer wide and up to 80 meters deep!).

So, all of these columnar basalts have been created when we have a big mass of lava slowly cooling down (e.g.: a crater lava lake; a lava pool along a lava flow; an injection of lava into the still plastic sea floor sediments). 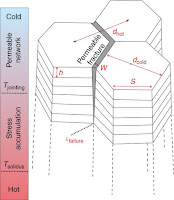 The formation of columnar joints produced by cooling in basalt at Staffa, Scotland

Disclosing the temperature of columnar jointing in lavas